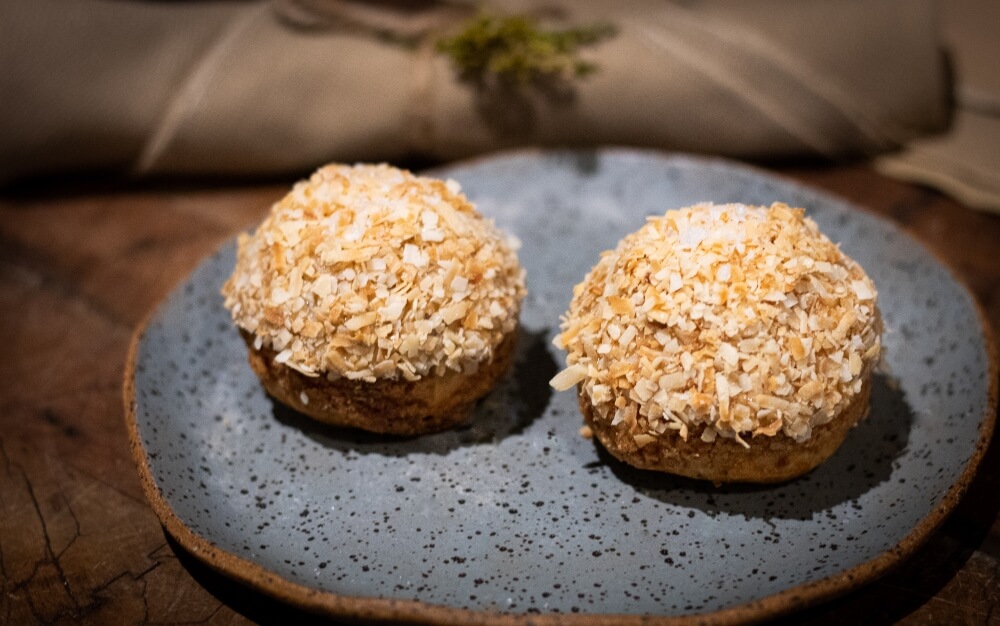 How to Make Perfect Choux Pastry

If you’ve ever made a choux pastry dessert, you know it’s not exactly a walk in the park. Even an experienced pastry chef can easily mess up a detail here and there that derails the entire endeavor.

So we put together this guide where we share all our choux pastry secrets. Will this guide make your choux pastries a worldwide sensation? It could, but only if you put in the work and develop your skill.

Let’s go over the basic recipe and then move into some tips and tricks.

Sources disagree about where choux pastry comes from. However, there’s no denying that it is a staple of French cuisine at this point. Traditionally it’s made with just four ingredients: butter, water, flour, and eggs.

Rather than use leavening agents in the pastry, its high moisture content allows it to rise through the action of steam. There are several tricks to getting choux pastry to rise correctly and keep it puffed, but let’s start at the beginning.

Use the listed ingredients exactly.

First, you’ll make the dough. In a saucepan over medium heat, combine the butter, milk, salt, and sugar. Stir constantly until the butter melts and bring it to a slow simmer. When it starts simmering, reduce to low heat and add all the flour. Mix vigorously until all the ingredients are incorporated, and the dough starts to form into a ball. Transfer it to a stand mixer with a paddle attachment.

Beat four eggs together and run the mixer on low after the dough cools slightly. Add in the eggs slowly while the mixer runs. You’re trying to achieve a shiny, smooth, and pipeable consistency, so if your dough appears ready before the beaten eggs are all incorporated, reserve the rest.

With the dough prepared, preheat your oven to 400℉ and lined two baking sheets with parchment paper. The most common use for choux pastry is creme puffs, and to make them you’ll want to pipe the dough into two-inch mounds about three inches apart. The spacing is crucial to allow the pastries to expand without getting in each other’s way.

Bake for 20 minutes, then reduce the heat to 350℉ and continue to bake for 10 more minutes. Never open the oven while the pastries are baking because they need consistent heat to rise correctly.

With the pastries done, you can move on to the filling. You can fill them with simple whipped cream, but pastry cream makes an excellent choux pastry filling if you want to go the extra mile. And it’s super simple to make.

Combine the milk and vanilla in a saucepan and bring it to a slow simmer before setting it aside. In a heat-proof bowl, mix together egg yolks, sugar, cornstarch, and salt. Whisk it until it’s a pale yellow, and then slowly incorporate the warm milk while whisking. Return to the stove and cook the choux creme for about five minutes over medium heat. When it starts bubbling, mix for another minute and remove it from the stove.

Add the butter as soon as you take it off the stove and whisk until it’s evenly melted throughout. Refrigerate it until it’s cold.

When you’re ready to complete the French choux pastry recipe, split the puffs into two halves and put a generous dollop of cream into each. Alternatively, use a piping bag to directly pipe the pastry cream into each puff’s cavity without splitting them.

Chocolate fans may be tempted to use a chocolate filling in their choux pastry. However, there’s a better way to get chocolate notes in there without overdoing it. Use the same recipe above, but incorporate two tablespoons of sugar-free cocoa into the flour. That’s it.

Now, to take it up a notch on the chocolate meter, you can also dip them into a chocolate sauce once they’re done.

A chocolate choux pastry shouldn’t be all about chocolate, though. By using a simple pastry cream, you’ll create a nice complementing flavor combination that is superior to just chocolate. Chocolate eclairs are made with the same choux pastry, so you can opt for that presentation as well.

As promised, here are a few little things you can do to give your choux pastry the best chance at success.

Taking It Up A Notch

You can keep experimenting with choux pastry to find various combinations that work well together. The possibilities are (almost) endless.

We’ve been working on our choux pastries for a long time at Stubborn Seed, and we’re really proud of what we’ve been able to create. If you’re ready to try a choux pastry that will knock your socks off, reserve a table right now.

We create the perfect choux bun, and fill it with delicious passion fruit mousse and then top the whole thing with caramelized white chocolate. You won’t believe your taste buds when you try it.

Which one of the tips in this guide was most useful to you? If you’re having specific issues with your choux pastry, share your concerns in the comments below, and we’ll try to help you out.